Georges CAUSSANEL was decorated four times during the ceremony of July 14, 1952 in Montauban by Colonel Runner (see article on the Dépèche du Midi of 07/16/1952) and the very beautiful quote that was read on this occasion summarizes the main lines of its action in the Resistance.

. Knight of the Legion of Honor in a military capacity

• Medal of the Resistance


"We are happy to publish this very beautiful quote which was the subject of the presentation of the Legion of Honor to Mr. Lieutenant CAUSSANEL who had the honors of this moving presentation of decorations, for having been quoted four times:" Caussanel (Georges, Raymond) an ardent, enthusiastic and disinterested patriot, who joined the Resistance in August 1940, asked for the most perilous tasks; P2 agent and sub lieutenant F.F.C (French Combatant Forces) seriously compromised his health in the performance of duty.
Suffering from pulmonary tuberculosis, as a result of the deprivations and fatigue of the clandestine combat, did not slow down his action and began to receive treatment until his release.
Mutilated and a 100% pensioner, he also remains enthusiastic in his patriotism. "
(Decree of June 7, 1952 - Official Journal of June 10, 1952)

He was also the holder of

- Cross of the Volunteer Combatant of the Resistance


He was part of the association of members of the Legion of Honor decorated at the risk of their lives.

Légion of honour in a military capacity

Medal of the resistance

Created by General de Gaulle by ordinance n ° 42 and decree n ° 774 of February 9, 1943, the Medal of the Resistance is "intended to recognize the remarkable acts of faith and courage which, in France, in the Empire and abroad, have contributed to the resistance of the French people against the enemy and its accomplices since June 18, 1940 ".

It was awarded to 65,295 resistance fighters (including 25,468 posthumously) belonging to both Free France and the Internal Resistance.

(source: Museum of the Order of the Liberation)

It is awarded to all persons recognized as "Free French" for having subscribed to an engagement in the FFL between June 18, 1940 and August 1, 1943, or for having served in territories which have joined the cause of the FFL. 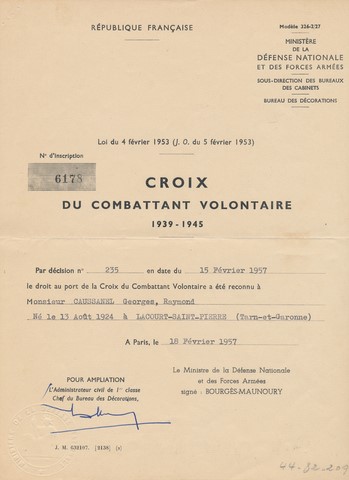 Cross of the Volunteer Resistance Fighter